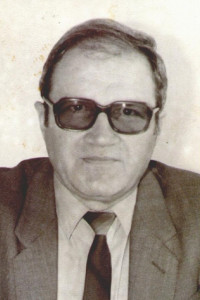 As of 1965 he joined, as a lecturer, the Department of Computers created at Politehnica in Timisoara, teaching “Computers and Programming”, “Logical Basis of Computers” and “Information Theory”.

In 1972 he became a reader at the Department of Computers until 1978, lecturing on “Logical Basis of Computers” (called, later on, “Analysis and Synthesis of Digital Computers”), “Structure of Computational Systems” (called afterwards “Structure of Systems Processing Digital Data”) and “Programming and Informatics”.

In 1978, as a professor, he continued to teach for all the students in Automation and Computers his courses on “Analysis and Synthesis of Digital Computers” and “Structure of Systems Processing Digital Data”, adding the course on “Digital Computers” in 1984.

Known as a remarkable dedicated member of the academic staff, Professor Pop published 14 books and textbooks - courses, design manuals, laboratory guides and problems textbooks. At the same time, he was involved in coordinating the design and creation of didactic computers as research activity with 4th and 5th year students, such as: the MCD1 microcomputer with integrated circuits created as a prototype within the “Microproduction Workshop” of the Politehnica Institute of Timisoara, the MCDP microcomputer (as experimental model and prototype), the MCD4 microcomputer, the MCD85 microcomputer with an 8085 microprocessor, a microprocessor 8080-aided microsystem for collecting and processing data from measuring instruments, the didactic minicomputer CETA 16 D, a microprocessor 68000 -aided computer microsystem, and others.

An outstanding talented scholar, calm, kind and considerate, a genuine communicator, Professor Pop was surrounded by students, eager to attend all his courses.

His research interests focused on arithmetic of computer systems, computer memories, structure of computer systems and artificial intelligence. The results of his research activity were published in 47 scientific papers – 27 published in the country and abroad, as well as 17 contract-based papers in support of firms and research-design organizations in the country. From among the scientific results of his research activity the following could be mentioned:

Professor Pop has been considered a distinguished scholar and personality of the golden generation of founders of the first School of Computers in Romania at the Politehnica of Timisoara. Together with Professor Alexandru Rogojan, Professor Vasile Pop has dedicated his whole life to Romanian higher education, believing and promoting its ideals. Supported by perseverance, sacrifice, wish and will, he succeeded to accomplish his mission and vision.