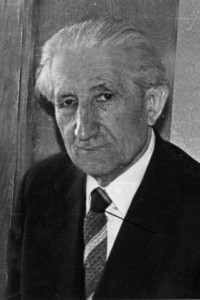 Professor Alexandru Rogojan was born in Dej in 1914. In 1933 he became a student at the Politehnica of Timisoara and graduated with honours in 1938.

During the war he served as an engineer at DURA (Electrobanat), the battery factory, and between 1943 and 1951 as an engineer at CFR Timisoara (Romanian railroads). During all those years he participated in repairing and changing the electric installations damaged by the war. Also, at the time he organized the first telecommunications laboratory within CFR Timisoara, and designed and created a teleconference installation at national level, highly appreciated by authorities.

Professor Rogojan delivered courses for engineers; Edmond Nicolau, a renowned Romanian scientist, attended these courses and, later on, became the supervisor for the Ph.D thesis defended by Professor Rogojan in Bucharest.

In 1948 Alexandru Rogojan was appointed  Professor for the subject “Low Current Technology”; encouraged by Academician Remus Radulet, he produced the manuscript of this course after only one year.

In 1952 Professor Rogojan became Head of the Department of Electric Measurements until 1983 when he retired.

From among the subjects he taught we could mention “Electric Measurements”, “Industrial Electronics”, “Control Engineering and Remote Control”, “Computers and Programming” for the students in Electromechanics, as well as “Electronic Computers”.

He dedicated much effort in acquiring the necessary apparats and equipment for practical activities to help students better understand the theoretical issues and develop the “sense of engineering”. His younger collaborators were permanently encouraged by his saying “just do things hands on”.

At the beginning of his activity at Politehnica Professor Rogojan focused his research on topics related to “High power mercury rectifiers” and “Voltage stabilizers with magnetic amplifiers”.

In 1960, at the age of 46, Professor Rogojan quit his previous professional interests, turning to explore, with passion and enthusiasm, the new field of Computers. He organized a small team and approached the technology of electronic tubes, being involved in the research, design and practical realization of circuits used for digital computers: bistable, monostable, nonstable, registers, adders, and others. As ferrite memories were going to replace magnetic core memories, he developed a complex research for producing ferrite rings within the Department. Simultaneously, members of the academic staff of the Chemical Engineering Faculty were attracted in the research. New equipment was supplied to the workshops of the Department, including sewing machines adapted to manufacture the ferrite rings by pressing ferrite powder, with minimum mechanical stiffness.

From among his outstanding achievements we mention the installation for testing ferrite ring behavior under excitation with specific chain impulse succession and the corresponding answers in the reading spiral. The installation, accomplished with the contribution of remarkable technicians, is part of the Computers Department museum.

It was professor Rogojan who created the first ferrite memory in the country, followed by further developments at the request of other research units at national level.

As a recognition of these merits, known and appreciated all over the country, The Ministry of Education approved in 1965 the creation of a Computers group within the Faculty of Electrical Engineering; the existence of such a group required curricular changes, imposing new specific subjects:

In 1966 The Ministry of Education approved the creation of a distinct Computers study programme with its own curriculum beginning with the third year, the basis of the first Romanian Computers School at Politehnica of Timisoara. Consequently, new subjects were introduced creating a solid background for educating students in the newly created domain.

With a strong belief in the importance of practical laboratory work, Professor Rogojan supported the provision of necessary equipment in all laboratories, together with mandatory textbooks and manuals for laboratory activities.

In the meantime, Professor Rogojan created a team of academic staff and technicians to design CETA (the Automatic Transistorized Electronic Computer) in the department workshops, replacing tube technology by transistor technology. CETA, characterized by performance similar to minicomputers at the time, was used for practical activities in the study of digital computers. Students were given the possibility to follow the step-by-step instructions, by means of a multi-purpose display panel. Parts of CETA are exhibited at the Computers Department.

The technological evolution of those days was reflected as well in the integrated circuits used for the computer Felix C-256. Also, he designed and built, within a contract with ELBA battery factory, a computer – tester of high complexity and reliability. By comparison, the import of such a tester, with lower performance, from Germany at the time would have costed 300,000 German marks. The required testing procedure was extremely complex, function of the number of electric batteries (over 500 per testing cycle), of the precision in measuring voltage across terminals during the charging, with no more than two exact decimals. For that period, the reliability provided by design and implementation was unusual, as only few defects were recorded after years of non-stop operation.

On the other hand, Professor Rogojan collaborated with the town industry, supporting the operation of out-of-order equipment with repairs and maintenance.

Work and leisure were equally appreciated by Professor Rogojan. Present at various student or graduate celebrations, he was an expert in dancing and telling anecdotes (written in his famous notebook of anecdotes).

Professor Rogojan was the first supervisor of Ph.D theses in Computer Science. He had been the PhD supervisor for many members of the Department in Timisoara and other Romanian towns; the supervision of the PhD thesis for Professor Mircea Petrescu from the Politehnica of Bucharest represented the starting point of a remarkable further collaboration.

One of the founders of the first Computers School in Romania, Professor Alexandru Rogojan has remained an example of devotion hard to equal.