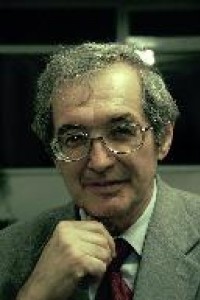 Professor Ioan Jurca was born in Tapia, next to Lugoj, on August 2nd 1947. After graduating “Coriolan Brediceanu” school in Lugoj as an outstanding pupil, he became a student at the Faculty of Electrical Engineering, at Politehnica in Timisoara, specializing in Electromechanics. In 1970 he graduated faculty as head of his class and started his academic career as an assistant lecturer at Politehnica Institute of Timisoara. Between 1973 and 1977 he completed his Ph.D at the University of Delft, Holland; at his return to the Department of Computers he was promoted as a lecturer, became a reader in 1990 and a professor in 1992, being in charge of supervising PhD students.

Professor Jurca was one of the founders of the Computers School in Timisoara, educating over 40 generations of students who act as experts all over the world. As a remarkable member of the academic staff, he initiated and taught many courses in software, introducing cutting-edge technologies of the field: “Object-Oriented Programming”, “Operating Systems”,” Programming Engineering”, “Programming of Computer Networks”, “Design of Computer Networks and Distributed Systems”.

He published numerous books, coursebooks, scientific papers in national and international proceedings and journals. He advised and supervised many PhD students, guiding them in their research that turned into projects and publications.

As a sign of recognition for his scientific and managerial merits he served in various important positions, contributing to the development and modernization of the Romanian education in computers, such as: Vice-Director and Director of the Computers Centre at Politehnica in Timisoara (1980 – 1988), founder and first Dean of the Faculty of Automation and Computers (1990-1992), Vice-Rector of the Politehnica University of Timisoara (1992-1996), Member of the National Council of Evaluating and Assessing Academic Titles (1994-2000). As a Director of Timisoara RoEduNet, the Romanian Internet Educational Network (1999 – 2012), he contributed in a significant way to the development of Romania’s academic internet network.

He was awarded the title of corresponding member of the Romanian Academy of Science and Technology, Information Technology and Communications – Computers and Telecommunications in 2006.

He was considered an outstanding member of the academic community of Timisoara, one of the most active appreciated professors, a thorough researcher who had had a leading role in the development and consolidation of the Computers School in Politehnica of Timisoara. His name was linked to promoting new disciplines such as: Programming languages, Modelling and simulation, Operating systems, Programming Engineering, Design and development of computer networks, supported by published courses and laboratory guides.

Professor Jurca will remain in the hearts and minds of his colleagues and students as an exquisite member of the academic staff, a researcher, a genuine colleague, who dedicated his whole life to the teaching and research of his department.

Corresponding member of the Romanian Academy of Science and Technology, 2006.